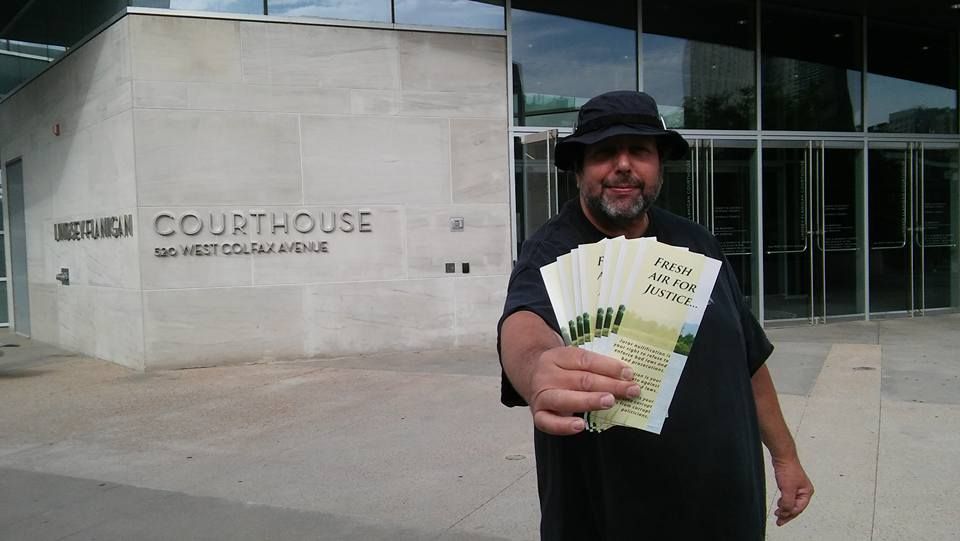 CONGRATULATIONS to Mark Iannicelli and Eric Brandt on their BIG WIN for juror rights education in the Colorado Supreme Court!

For more than four years, these volunteer juror rights educators have been bullied and harassed repeatedly by Denver police and prosecutors. Now the Court has found in favor of Iannicelli and Brandt. Its ruling affirms the judgment of the district court and Colorado Court of Appeals dismissing the false felony jury tampering charges against Ianicelli and Brandt.

The Court addressed two main issues in its ruling:

In a 5-2 majority opinion, the Court ruled that:

...for purposes of the jury tampering statute, a “juror” is defined as set forth in section 18-8-601(1), C.R.S. (2019), and therefore includes persons who have been drawn or summoned to attend as prospective jurors. The court further concludes that the jury tampering statute’s references to “a case” and “the case” make clear that for purposes of that statute, a defendant’s effort to influence a juror must be directed at a specifically identifiable case.

Because the People did not charge the defendants with attempting to influence a juror in a specifically identifiable case, the court affirms the judgment of the division below, although the court’s reasoning differs in some respects from that of the division.

Lane pointed out of the criminal case that "This is one of the few cases in the country defining whether or not passing around jury nullification literature is jury tampering. Every case that's been decided on that issue, of which there are very few, came down the same way the Colorado Supreme Court did."

Judge Carlos Samour's minority opinion betrays not only a failure to understand the history and purpose of trial by jury in the United States but also substantial misunderstanding about FIJA's mission and work.

The judge selectively quotes both Thomas Jefferson and Alexander Hamilton supposedly in opposition to (at least what he thinks is) FIJA's educational mission and the courthouse juror rights education conducted in support of it. This is perplexing on two counts:

Based on his minority opinion, Judge Samour seems unaware that the United States' very existence traces back to jury nullification. The American Revolution was fought in significant part to defend access to trial by jury and jurors' right to conscientiously acquit defendants who had broken the law.

Particularly eyebrow-raising is his cherry-picking of Alexander Hamilton's comments from The Federalist No. 83, referring to trial by jury as a "valuable safeguard to liberty" and the "very palladium of free government".

Trial by jury, indeed, can be said to be both those things. But as Hamilton understood, the very reason trial by jury can be said to so is jurors' right of conscientious acquittal by jury nullification. Alexander Hamilton himself said as much in his arguments in the case of People v. Croswell (1804).

In Croswell, as in the pre-revolutionary case of John Peter Zenger (represented by Andrew Hamilton, not to be confused with Alexander), a sharp-tongued printer was prosecuted for libel against a government official. Croswell had dared to criticize executive acts of then-President Thomas Jefferson as unconstitutional and commented negatively about a $100 dollar payment he had made to another publisher.

In his charge to the jury during Croswell's initial trial, the judge had falsely instructed the jury about their authority (or lack thereof) in judging various aspects of the case, including the law itself. This was one of the issues on which the defense based their appeal.

Hamilton was not officially part of the defense team during Croswell's trial, but became formally involved when the case was appealed. In his argument, he spoke passionately in support of jurors' right to judge the law in criminal cases, citing it specifically as "the great security of the subject against the oppression of government":

But it is not only the province of the jury, in all criminal cases, to judge of the intent with which the act was done, as being parcel of the fact; they are also authorized to judge of the law as connected with the fact. In civil cases, the court are the exclusive judges of the law, and this arose from the nature of pleadings in civil suits; for anciently, matters of law arising in the defence, were required to be spread upon the record, by a special plea, and the jury were liable to an attaint for finding a verdict contrary to law. But in criminal cases, the law and fact are necessarily blended by the general issue, and a general verdict was always final and conclusive, both upon the law and the fact. Nor were the jury ever exposed to an attaint for a verdict in a criminal case; and this is decisive to prove that they had a concurrent jurisdiction with the court on questions of law; for where the law allows an act to be valid or definitive, it presupposes a legal and rightful authority to do it. This is a sure and infallible test of a legal power.

In England trial by jury has always been cherished, as the great security of the subject against the oppression of government; but it never could have been a solid refuge and security, unless the jury had the right to judge of the intent, and the law.

History suggests that rather than supporting Judge Samour's dissent, Hamilton would have sided with the majority.

Judge Samour repeatedly and falsely accuses Ianicelli and Brandt of  He calls their courthouse outreach efforts "conduct admittedly aimed at nullifying jury verdicts," mischaracterizes sharing FIJA brochures as "working to thwart trial by jury," and claims that they were "attempting to nullify jurors' decisions".

The most generous way I can interpret these false accusations is ignorance on the judge's part—something that would be very surprising for someone of such stature in the legal profession as to have been entrusted with a seat on the Colorado Supreme Court. Whether his comments stem from ignorance or something else, I want to take this opportunity to correct his mischaracterizations.

The Fully Informed Jury Association and volunteer juror rights educators work to fully inform jurors of their full rights and authority—a legacy of our common law tradition purposely preserved by design into the United States jury system—in judging the law as well as the facts in any case before them.

It is jurors' ability to temper law with mercy to deliver just verdicts—even as the government demands strict adherence to its own interpretation of its unjust laws and practices—that keeps the government in check.

Unlike judges and prosecutors, we trust fully informed jurors to deliver just verdicts in whatever cases may before them. And unlike judges and prosecutors, we do not seek to rig juries, mislead jurors into unjust convictions and sentences they regret for the rest of their lives, conceal from them key information they need to deliver just verdicts such as their right to conscientiously acquit by jury nullification, the punishment the defendant faces for each charge, and so on.

If a spotlight is to be shone on someone for attempting to nullify jurors' verdicts in practice so as not to get in the way of government-preferred verdicts, it belongs directly on prosecutors and judges—the very government officials who have driven trial by jury to the brink of extinction through abusive plea bargaining, sentencing, and other practices that have demonstrably undermined trial by jury.

What courageous and persistent volunteers like Mark Iannicelli and Eric Brandt deserve from everyone and have from us here at the Fully Informed Jury Association is our heartfelt thanks and admiration.

For the past four years their lives have been on the line, and they have lived with the very real possibility left open that they could spend years of their lives in prison. I cannot emphasize enough the fortitude it takes not to crumble under that kind of sustained pressure from the governmental Goliaths.

I imagine that it was of immense help in facing such a dangerous situation to have David Lane and Andrew McNulty fighting for them every step of the way.

THANK YOU TO YOU ALL!