An Essay on the Trial by Jury 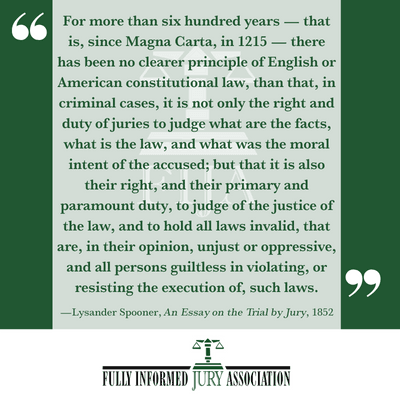 THE RIGHT OF JURIES TO JUDGE OF THE JUSTICE OF LAWS.

For more than six hundred years—that is, since Magna Carta, in 1215—there has been no clearer principle of English or American constitutional law, than that, in criminal cases, it is not only the right and duty of juries to judge what are the facts, what is the law, and what was the moral intent of the accused; but that it is also their right, and their primary and paramount duty, to judge of the justice of the law, and to hold all laws invalid, that are, in their opinion, unjust or oppressive, and all persons guiltless in violating, or resisting the execution of, such laws.

Unless such be the right and duty of jurors, it is plain that, instead of juries being a “palladium of liberty”—a barrier against the tyranny and oppression of the government—they are really mere tools in its hands, for carrying into execution any injustice and oppression it may desire to have executed.

But for their right to judge of the law, and the justice of the law, juries would be no protection to an accused person, even as to matters of fact; for, if the government can dictate to a jury any law whatever, in a criminal case, it can certainly dictate to them the laws of evidence. That is, it can dictate what evidence is admissible, and what inadmissible, and also what force or weight is to be given to the evidence admitted. And if the government can thus dictate to a jury the laws of evidence, it can not only make it necessary for them to convict on a partial exhibition of the evidence rightfully pertaining to the case, but it can even require them to convict on any evidence whatever that it pleases to offer them.

That the rights and duties of jurors must necessarily be such as are here claimed for them, will be evident when it is considered what the trial by jury is, and what is its object.

“The trial by jury,” then, is a “trial by the country”—that is, by the people—as distinguished from a trial by the government.

It was anciently called “trial per pais”—that is “trial by the country.” And now, in every criminal trial, the jury are told that the accused “has, for trial, put himself upon the country; which country you (the jury) are.”

Any government, that is its own judge of, and determines authoritatively for the people, what are its own powers over the people, is an absolute government of course. It has all the powers that it chooses to exercise. There is no other—or at least no more accurate—definition of a despotism than this.

On the other hand, any people, that judge of, and determine authoritatively for the government, what are their own liberties against the government, of course retain all the liberties they wish to enjoy. And this is freedom. At least, it is freedom to them; because, although it may be theoretically imperfect, it, nevertheless, corresponds to their highest notions of freedom.

It is fairly presumable that such a tribunal will agree to no conviction except such as substantially the whole country would agree to, if they were present, taking part in the trial. A trial by such a tribunal is, therefore, in effect, “a trial by the country.” In its results it probably comes as near to a trial by the whole country, as any trial that it is practicable to have, without too great inconvenience and expense. And as unanimity is required for a conviction, it follows that no one can be convicted, except for the violation of such laws as substantially the whole country wish to have maintained. The government can enforce none of its laws, (by punishing offenders, through the verdicts of juries,) except such as substantially the whole people wish to have enforced. The government, therefore, consistently with the trial by jury, can exercise no powers over the people, (or, what is the same thing, over the accused person, who represents the rights of the people,) except such as substantially the whole people of the country consent that it may exercise. In such a trial, therefore, “the country,” or the people, judge of and determine their own liberties against the government, instead of the government’s judging of and determining its own powers over the people.

If the government may decide who may, and who may not, be jurors, it will of course select only its partisans, and those friendly to its measures. It may not only prescribe who may, and who may not, be eligible to be drawn as jurors; but it may also question each person drawn as a juror, as to his sentiments in regard to the particular law involved in each trial, before suffering him to be sworn on the panel; and exclude him if he be found unfavorable to the maintenance of such a law.*

The jury are also to judge whether the laws are rightly expounded to them by the court. Unless they judge on this point, they do nothing to protect their liberties against the oppressions that are capable of being practised under cover of a corrupt exposition of the laws. If the judiciary can authoritatively dictate to a jury any exposition of the law, they can dictate to them the law itself, and such laws as they please; because laws are, in practice, one thing or another, according as they are expounded.

The jury must also judge whether there really be any such law, (be it good or bad,) as the accused is charged with having transgressed. Unless they judge on this point, the people are liable to have their liberties taken from them by brute force, without any law at all.

The jury must also judge of the laws of evidence. If the government can dictate to a jury the laws of evidence, it can not only shut out any evidence it pleases, tending to vindicate the accused, but it can require that any evidence whatever, that it pleases to offer, be held as conclusive proof of any offence whatever which the government chooses to allege.

*To show that this supposition is not an extravagant one, it may be mentioned that courts have repeatedly questioned jurors to ascertain whether they were prejudiced against the government—that is, whether they were in favor of, or opposed to, such laws of the government as were to be put in issue in the then pending trial. This was done (in 1851) in the United States District Court for the District of Massachusetts, by Peleg Sprague, the United States district judge, in empanelling three several juries for the trials of Scott, Hayden, and Morris, charged with having aided in the rescue of a fugitive slave from the custody of the United States deputy marshal. This judge caused the following question to be propounded to all the jurors separately; and those who answered unfavorably for the purposes of the government, were excluded from the panel.

“Do you hold any opinions upon the subject of the Fugitive Slave Law, so called, which will induce you to refuse to convict a person indicted under it, if the facts set forth in the indictment, and constituting the offence, are proved against him, and the court direct you that the law is constitutional?”

The reason of this question was, that “the Fugitive Slave Law, so called,” was so obnoxious to a large portion of the people, as to render a conviction under it hopeless, if the jurors were taken indiscriminately from among the people.

A similar question was soon afterwards propounded to the persons drawn as jurors in the United States Circuit Court for the District of Massachusetts, by Benjamin R. Curtis, one of the Justices of the Supreme Court of the United States, in empanelling a jury for the trial of the aforesaid Morris on the charge before mentioned; and those who did not answer the question favorably for the government were again excluded from the panel.

It has also been an habitual practice with the Supreme Court of Massachusetts, in empanelling juries for the trial of capital offences, to inquire of the persons drawn as jurors whether they had any conscientious scruples against finding verdicts of guilty in such cases; that is, whether they had any conscientious scruples against sustaining the law prescribing death as the punishment of the crime to be tried; and to exclude from the panel all who answered in the affirmative.

The only principle upon which these questions are asked, is this—that no man shall be allowed to serve as juror, unless he be ready to enforce any enactment of the government, however cruel or tyrannical it may be.

If that be the true principle of the trial by jury, the trial is utterly worthless as a security to liberty. The Czar might, with perfect safety to his authority, introduce the trial by jury into Russia, if he could but be permitted to select his jurors from those who were ready to maintain his laws, without regard to their injustice.

This example is sufficient to show that the very pith of the trial by jury, as a safeguard to liberty, consists in the jurors being taken indiscriminately from the whole people, and in their right to hold invalid all laws which they think unjust.

Source:
Trial by Jury by Lysander Spooner is in the public domain and can be found on the Internet Archive.