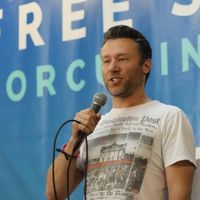 Robert Anthony Peters serves as Vice Chairman of the Fully Informed Jury Association. He is a professional actor (theater, film, voiceovers, and audiobook readings) and SAG-AFTRA member, an award-winning filmmaker, and a frequent lecturer on a variety of pro-liberty topics. Robert also serves a policy advisor for the Heartland Institute, is a member of the inaugural Foundation for Economic Education Alumni Board, leads discussions for Liberty Fund, and is a contributor to The Freeman.

Currently he lectures internationally with a special focus on the relationship between art and liberty. His recent engagements include speaking at a number of film festivals screening his film Tank Man. Inspired by the iconic image of a man blocking tanks in Tiananmen Square in 1989, Tank Man is a short film inspired by the actions of a man who was willing to thwart the progress of one of the most powerful governments in the world. It has won several awards including the award for Best Short Film at the 2019 Whistleblower Summit and Film Festival and the Audience Choice Award at the 2019 Anthem Film Festival.