Supreme Court No. 17–646
Supreme Court Docket
federal prosecutors indicted Terance Martez Gamble for the same offense for which he had already pleaded guilty and been sentenced in Alabama state court 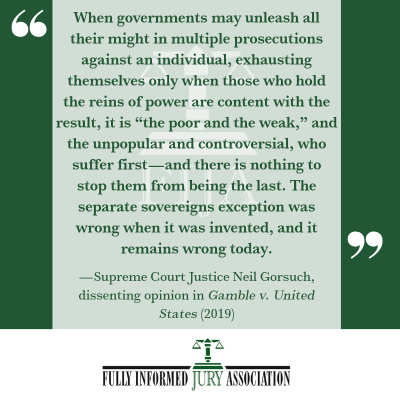 In 2015, petitioner Terance Martez Gamble was pulled over in Mobile, Alabama because of a damaged headlight. When the officer searched Gamble's car, he smelled marijuana and used that as a basis for searching the vehicle. In the course of the search, he found a loaded handgun as well as two bags of marijuana.

Gamble had previously been convicted of a crime (second-degree robbery) making his possession of the handgun a violation of Alabama Code §13A–11–72(a) (see also §13A–11–70(2) explicitly defining robbery as a crime of violence). Gamble pleaded guilty to violating this state law and was sentenced to 10 years in prison with all but one year suspended.

That was not, however, the end of the legal process. Federal prosecutors went after him for the exact same offense, except that in this case it was a violation of federal law rather than state. He again pleaded guilty and was sentenced to nearly another three years incarceration, stacking one punishment upon the other for the exact same transgression.

One might think, as Gamble argued, that double prosecution and punishment for the same offense violations the double jeopardy clause of the Fifth Amendment.

By a 7-2 ruling, the Supreme Court held that, "The dual-sovereignty doctrine" under which Gamble was prosecuted twice for the same offense by two different government entities "is not an exception to the double jeopardy right". Justices Ruth Bader Ginsburg and Neil Gorsuch each filed a dissenting opinion.

Among other things, both Ginsburg and Gorsuch in their dissents took strong issue with the majority's faulty understanding of who are sovereigns in the United States. Ginsburg wrote:

The Court seems to assume that sovereignty in this country belongs to the state and federal governments, much as it once belonged to the King of England. But as Chief Justice Marshall explained, “[t]he government of the Union . . . is emphatically, and truly, a government of the people,” and all sovereignty “emanates from them.”21 Alexander Hamilton put the point this way: “[T]he national and State systems are to be regarded” not as different sovereigns foreign to one another but “as ONE WHOLE.”22 Under our Constitution, the federal and state governments are but two expressions of a single and sovereign people. 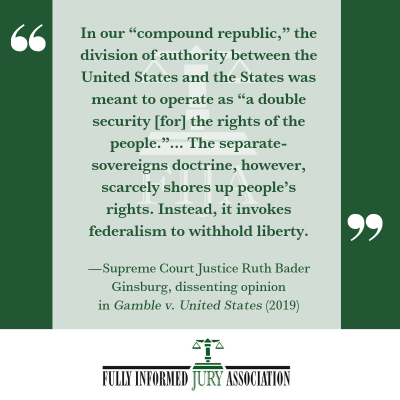 The prohibition against double jeopardy is one of the features of the American legal system that gives some real power to jurors' right to conscientiously acquit a defendant by jury nullification.

Were there no prohibition against double jeopardy in our legal system, prosecutors could re-prosecute time after time after time someone who had been acquitted, shopping around for a jury who would eventually convict.

Some semblance of prohibition against double jeopardy is still intact in our legal system, albeit not the robust protection originally intended by the founders. However, this ruling ensures that the "loophole" created by the dual sovereignty doctrine will continue to substantially weaken it for the foreseeable future.

As the proliferation of federal criminal laws continues, some legal professionals are concerned that this latest ruling will embolden prosecutors to double prosecute more aggressively.