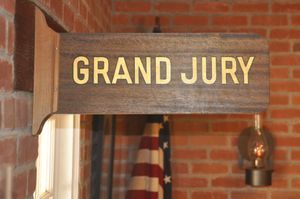 As the public awaits an announcement from a Louisville grand jury regarding whether or not they will indict any of the officers involved in the shooting death of Breonna Taylor, a question has been sent to us that I think will be useful to share with you here:

I am trying to understand the role of a grand jury in the Breonna Taylor case. I thought that jurors have the right to decide questions of law generally, but everything I keep seeing pertains to nullification to acquit. If jurors, as a matter of conscience, feel that the law is unjust, can't they vote to indict?

Thank you for the question.

FIJA's main focus area is referred to in terms like jury nullification, conscientious acquittal, and juror veto. All those terms have a rhetorical slant to them, don't they? Their tone is one of leniency toward the accused.

There is a reason for that.

It is important to understand the origins of the American jury system. Its roots date back to at least the sealing of the Magna Carta in 1215. At at a time when England was ruled by a man who believed and told people that “the law is in my mouth,” meaning the law was whatever he said it was, the Magna Carta was designed in part to prevent King John from arbitrarily punishing those who did not comply with his abusive edicts.

Its list of grievances read in part and in this order:

For imposing Taxes on us without our Consent:

For depriving us in many cases, of the benefits of Trial by Jury:

For transporting us beyond Seas to be tried for pretended offences

These three grievances tell a story. Much as the barons did in the time of the Magna Carta, English colonists in America objected to the abusive confiscation of their wealth without even having any say in the matter. They were incensed that they were not afforded equal protection by the processes that had evolved out of this Magna Carta as those overseas enjoyed.

Given this history, it is understandable why the Founders designed the American criminal legal system not as a level playing field, but with the playing field intentionally tilted in favor of the accused.

No legal system ever has been or ever will infallibly dispense the maximum possible justice. Humans are imperfect. Information in many cases is absent or unclear. We cannot read one another's minds. That there will be error in any legal system is an unavoidable fact.

While we cannot prevent error entirely, we can design a system to err in a more acceptable direction. Because we have seen throughout our history the dramatically more harmful abuses that are committed when the government is given free rein to accuse and punish people without restraint, the American jury system is designed to err on the side of mercy toward and liberty of the accused. (Yes, even if the accused individual or individuals were acting as part of that government.)

This concept is well summed up by a well-known principle expressed by famed legal scholar William Blackstone that it is better that ten guilty persons go free, than for one innocent to suffer. To that end, the American jury system was originally designed with several features intended to make it much more difficult to punish someone than to let them go free.

For example, to deliver a verdict, a jury must not simply have a majority in favor or even a supermajority, but rather complete unanimity. Without unanimity the defendant is not convicted. There is either a hung jury or an acquittal. Only if all jurors agree can a person be convicted.

The system originally included a prohibition against twice putting someone in jeopardy for the same offense. Again, this was not a level playing field. If a person was acquitted, the prosecution could not appeal the jury's verdict. If a person was convicted, however, the accused was afforded the possibility of appealing the conviction.

Another fundamental of the American jury system is that a judge may never direct a jury to deliver a verdict of guilty. They may, however, direct a not guilty verdict. Judges also have the power to set aside a jury's guilty verdict and enter what is called a judgement notwithstanding the verdict, but they may not do likewise with a jury's not guilty verdict.

While the government has done much to tilt the playing field in favor of conviction, straying from the original intent of the Founders, jurors' right to vote their conscience even when they disagree with the law still does not have a symmetric effect on outcomes.

It is even more unlikely that an accused person who had not broken the law but was indicted anyway would also be convicted by a unanimous jury, have a judge who did not set aside that verdict, and fail in all of their appeals. It's not impossible, of course, especially in the modern jury system whose processes and protections have been so perverted from their original design. However, I think you can see why, when you hear about jurors' right to judge the law as well as the facts in a case, you will usually hear about nullification, acquittal, veto power, and other language geared toward the scenarios of non-indictment and non-conviction.

There is nobody who will agree with every jury's verdict or the outcome of every potential criminal case. I am no exception. When I am dissatisfied with an outcome in a particular case, though, whether it be a conviction I think is wrong or someone who did real, serious harm being given a pass, I try to keep in mind that it is more important to design and maintain a healthy system overall than it is to get a specific result in a particular case.

That is why even when I disagree with an individual outcome, you won't hear me badmouthing jurors or suggesting we trash the entire system. Rather, my goal is to restore, preserve, maintain, and otherwise ensure everyone has access to the best system I know of for safeguarding liberty and justice in the world today, imperfect though it be.