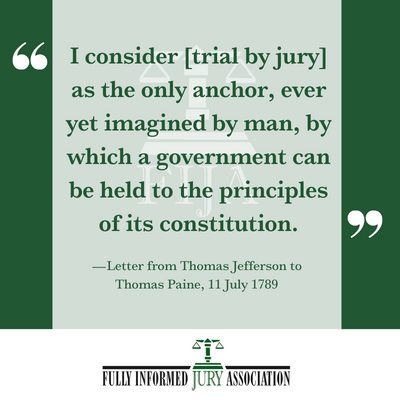 Happy Constitution Day! On this day in 1787, a sufficient number of delegates to the Constitutional Convention in Philadelphia signed the version of the document before them and it subsequently went to the states for ratification. Even before the Constitution was drafted, the thread of jury rights was destined to be woven into its legal fabric. Arguably, jury rights are the most extensively protected rights in the Constitution!

How many provisions for our jury rights in the United States Constitution can you think of off the top of your head? Read on to see if YOU have missed any, and let us know if WE have missed any!

Not only are jury rights expressly guaranteed in four different provisions of the United States Constitution, but they are bolstered by other Constitutional provisions.

Criminal Trial by Jury
The right to trial by jury was initially guaranteed for all crimes within the body of the Constitution itself in Article III, Section 2:

The Trial of all Crimes, except in Cases of Impeachment, shall be by Jury; and such Trial shall be held in the State where the said Crimes shall have been committed; but when not committed within any State, the Trial shall be at such Place or Places as the Congress may by Law have directed.

This was reiterated in the Bill of Rights in the Sixth Amendment:

In all criminal prosecutions, the accused shall enjoy the right to a speedy and public trial, by an impartial jury of the state and district wherein the crime shall have been committed, which district shall have been previously ascertained by law, and to be informed of the nature and cause of the accusation; to be confronted with the witnesses against him; to have compulsory process for obtaining witnesses in his favor, and to have the assistance of counsel for his defense.

Grand Juries
Not only does the Fifth Amendment guarantee the right to for those accused of capital or other serious crimes to be brought to trial by a grand jury, but its Due Process Clause and Double Jeopardy Clause also put teeth into the protections of criminal trial by jury:

No person shall be held to answer for a capital, or otherwise infamous crime, unless on a presentment or indictment of a grand jury, except in cases arising in the land or naval forces, or in the militia, when in actual service in time of war or public danger; nor shall any person be subject for the same offense to be twice put in jeopardy of life or limb; nor shall be compelled in any criminal case to be a witness against himself, nor be deprived of life, liberty, or property, without due process of law; nor shall private property be taken for public use, without just compensation.

The Seventh Amendment provides for trial by jury in civil suits for matters in disputes valued over twenty dollars:

In suits at common law, where the value in controversy shall exceed twenty dollars, the right of trial by jury shall be preserved, and no fact tried by a jury, shall be otherwise reexamined in any court of the United States, than according to the rules of the common law.

Incorporation of Jury Rights to the States

Through the Equal Protection Clause Fourteenth Amendment, many (but not all) of the provisions of the Bill of Rights were incorporated to the states:

Several explicit and implicit jury-related provisions of the Sixth Amendment have been applied to the states either by language in the Fourteenth Amendment (such as the Equal Protection Clause) or through incorporation to the states by the Supreme Court including the rights to:

The Fifteenth Amendment guarantees (and gives Congress the power to enforce) that:

The Nineteenth Amendment guarantees (and gives Congress the power to enforce) that:

The Twenty-Sixth Amendment guarantees (and gives Congress the power to enforce) that:

Most people automatically assume these refer to voting on candidates and initiatives at the ballot box. However, Constitutional scholar Vikram D. Amar, dean of the University of Illinois School of Law, argued in his 1994 paper entitled Jury Service as Political Participation Akin to Voting, that "the Constitution speaks to the exclusion of groups from jury service most directly through the voting amendments, beginning with the Fifteenth and running through the Twenty-Sixth."

Race-based and sex-based discrimination in jury selection have been prominently litigated in the courts, with the principal firmly established that such discrimination is illegal (though how to address it when it does happen has been an ongoing source of litigation).

Age-based discrimination in jury selection, on the other hand, has not been addressed with anywhere near the same level of public scrutiny in the United States.  Yet there is good reason to think this may be a future source of jury rights litigation. For instance, there were disturbing anomalies discovered in Calcasieu and East Baton Rouge parishes in Louisiana in 2019 showing jury pools that were drastically skewed to exclude or under-represent people under the age of 30. Moreover, a FIJA research project inventorying jury laws in the 50 states revealed that at least four states explicitly exclude some young voters from jury service based on their age, including:

When the time comes that young adults decide to push the issue and claim their legitimate right to serve as jurors and to be judged by juries free from age-based discrimination against their peers, not only will they have the Fourteenth Amendment to stand on, Amar suggests, but the Twenty-Sixth as well.