On This Day in Jury History 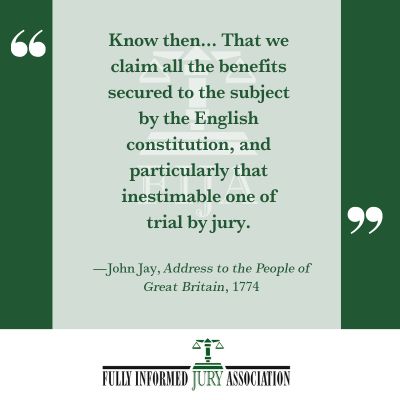 John Jay is probably best known in jury nullification circles for his instruction to the jury in Georgia v. Brailsford (1793) fully informing them of their right to judge the law as well as the facts in the case before them.

But have you read his pre-revolution address to the people of Great Britain, penned on 18 November 1774?

While the Address to the People of Great Britain was signed by a committee, it is believed that John Jay was its author. Years later, he would go on to become chief justice of the United States Supreme Court.

This document further illustrates that the Crown's violation of the colonists' right to trial by jury is one of the key grievances leading to the American Revolution.

I love the fiery rhetoric that shows that John Jay had a fire in his belly for jury rights long before Georgia v. Brailsford. He does NOT mince words! If you have a few minutes, click below to read this wonderful address.